By The Grace of God

Today, I saw the magnificent grace of God take control of my situation and turn everything around for good.

My little cousin came up here to help me with my daughter and I was attempting to get her to the train station to catch her train back home. I had planned everything out the night before. I would wake at 8:30am and get the ball rolling to arrive at the station in time for us to sit, chat and say our goodbyes. As 10am rolled in and I began my drive to George Washington Parkway, I realized we were running really late. I told her this and she said 'oh we have plenty of time', but I quickly reminded her how I am prone to getting lost in DC and that we really did not have that much time.

I remembered a lot from the trip to pick her up, but low and behold when I got on Massachusetts Ave, something went wrong. I missed a turn and was in unfamiliar territory. I tried to map my way out of there with my iphone but was too confused with the O, P, N and J's of DC streets. I started to curse, then reallized I needed to pray. That is what I did.

After a few u-turns and asking a pedestrian for help, I told God it was up to Him to lead me in. I did not know where the station was. I drove on instincts and somehow came up beside union station with 10 minutes to spare. I parked and we literally ran all the way to the station and through it to the check-in.

I did not know how to use the machine, but a fellow train rider quickly told me what to do. I got the ticket and we ran all the way through the station to gate J. We had 5 minutes to spare and the lady at the gate told my cousin 'you have got to hurry; run downstairs to J24'. She took off with a flash and the lady closed the gates for anyone boarding that train.

I stumpled over to my seat, tired and praying she'd make it. I sat there for 10 minutes with my little angel waiting and waiting. I called my cousin on her cell but it went to voicemail. I started the walk back to the car (after cleaning up my daughter who had somehow managed to poop everywhere except in the diaper).

I began the drive back home and got a call from my cousin. She said she made it. She was on the train and safe and sound. All thanks go to the Lord!

We have to remember to call on Him when things look like they are turning for the worse and there is no way we can make it work. God is always in control and He will direct our paths if we only ask.

Posted by Polly and Meek at 5:17 PM No comments: 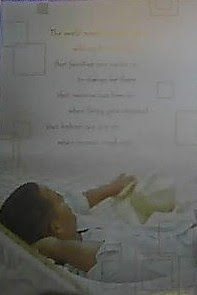 Everyday is a good day to celebrate Dad. Thanks Hallmark for saying it best.

The world needs more daddies
who nuture and care,
that families can count on
to always be there...

that mamas can love on
when living gets stressed...
that babies can cry on
when mamas need rest...

that daughters can call on
to share tears and laughter...
that sons can fall back on,
respect, and take after...

Dedicated to fathers everywhere. You are amazing!

Last week I was listening to a debate on the radio about whether children's church should be mandatory or not. I immediately thought about what a blessing this fairly new idea has been to my family. If you're not familiar, children's church is a lot like Sunday school but it happens during the regular service. It's called "Praise Kids" at our church.
When we arrive on Sundays the first thing we do is check all three of our children into their classrooms. The two smaller ones go to one class and the oldest goes to another. There the children are taught about God on their level. This is done through crafts, music and short movies and activities that pertain to the Bible. Snacks are even provided in the lower level class. Kids in the higher level class are given "church bucks" that they earn through take home exercises and class participation. On the first Sunday, the Praise Kids store opens and they can shop for fun items.
Sometimes I volunteer at children's church because there can be lots of children and if there are any teachers out sick, the rest of the staff will need help. It's the best way for me to serve right now, while my children are still small. However, on most Sundays, I go back to the sanctuary where I can enjoy the service in peace. It's amazing how much better I can hear from God without my little ones taking my attention as I try to keep them quiet and under control.
But the best part of the program? The best part of this is that the children are really learning! The format of teaching is so engaging and fun that the kids can't help but enjoy themselves. They talk more about the lessons of the bible and can't wait to go to church every Sunday. Even when we're at home they listen to the bible stories more intently and try hard to apply the lessons. This new attitude is definitely because of Sunday morning worship and I'm so happy to leave the dread about going to church behind. Now my children embrace God's message with open arms; for that I am grateful.
Three cheers for Praise Kids!
Many blessings,
Polly
Posted by Polly and Meek at 3:10 PM No comments:

Each week at my day job, a group of my employees play the lottery. It started out as a small group and has quickly expanded to 20 of the 35 employees at my site. I am one of the players...every week putting my $1 or $2 into the pot in hopes of winning the 'big pot'. The most we have won so far is $16. But still I play.
Sometimes I tell myself that I am not going to participate because a dollar or two a week adds up. Thats $4-$8 a month and $48 to $96 a year! But once they start collecting, I feel compelled. What if this is the one and I don't put my $1 in. Its not going to break me. That's what I say as I dive into my purse and scrounge up coins if needed to enter the pool.
It was weighing on me a bit and I was chatting with a co-worker about it. I told her, I need to win so that I can bless some people. She said 'well Amen to that'. Then we started up a conversation about helping others and we both understand that is what we are supposed to do. Its not worth having if we cannot bless others. Of course I want to spend and make my family comfortable, but I don't think I could ever be happy hoarding a large sum of money while others barely get by. Still, as the weeks went by and we did not win anything, I thought maybe this was the wrong path and I should just stop altogether.
I was visiting Proverbs 31 Devotions and low and behold there was a blog on the lottery. The blogger was one in a group who would pool their money and buy lottery tickets, just like my group of co-workers do. She said one day she did not have the $5 that they were collecting and did not play and that was the day 13 employees won $33 million dollars! She went on to say how she was bitter and jealous, much as I KNEW I would be if my co-workers won the big pot on a day I did not give my $1. Her blog brought her to a different outcome than the one I arrived at...keep playing because it can happen.
I truly believe that it is my calling to help others and that I will be a blessing to people that need it the most. I know its not always financial, but I think that is the way "I" am supposed to bless people. I pray each night that God leads and guides me to my calling and that I am ready and willing to hear and obey Him when He does.
So, what is your calling?
Many Blessings,
Meek
Posted by Polly and Meek at 10:00 PM No comments:

Email ThisBlogThis!Share to TwitterShare to FacebookShare to Pinterest
Labels: lottery, Polly and Meek

As I sit here enjoying the free Wi-fi at Chick-fil-a I can't help but reflect on the blessings I've received today. I'll recount in reverse because I have a full belly now and I just praise God for Chick-fil-a chicken. It's good all the time.

Before coming here for a late lunch we visited the dentist and no one had cavities! Praise the Lord again! We had arrived there on time after leaving the allergist. I needed to drop off several medical forms so that Lauren would be ready for camp this summer. I pulled up at 12:30pm just as I remembered that the office is closed during lunch. So I sat, unphased. I'd check if they were open after I filled in Lauren's name on the forms. Sure enough door was wide open and I hadn't come all that way for nothing. The receptionist had me cracking up about my good fortune because someone forgot to lock the door. She commented on Lainey's $10 sandals which came from Target. "Ooo," said the receptionist, "I love Target and Walmart too. Although, you can never get out of Walmart cause it's always so busy." I told her that was true, but guess what? My brake lights went out this morning right after dropping all the kids off. Walmart was on my route home so I stopped by on the off chance that they could fix the lights before the school bus came AND do it for cheap. I testified to the receptionist that it cost $15 dollars and I was out of there in 20 minutes flat. She said, "Well you'd better buy a lottery ticket cause at this rate you're subject to be a millionaire before the day is over." We laughed again and said goodbye.

No doubt the best blessing of the day had been dropping Lauren and Orion off for camp and meeting another impressionable receptionist. I did not yet have the medical forms completed for this first camp because they didn't send a notice like all the others. So I took the medicine with us anyway. The lady at the front desk was so kind. She told me they aren't a private practice. "Fill the form out later and bring the medicine in right now," she said. I was so overjoyed to have Lauren's health take priority over being sued. I knew right then it was the work of God.

The day was capped when the holy ghost came over me as I listened to the Clark Sisters sing I'm Looking For A Miracle. As the song says, "Just believe and receive it. God will perform it today!

Blessings,
Polly
Posted by Polly and Meek at 3:11 PM No comments: 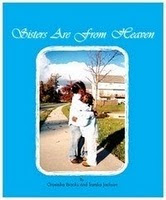